IT’S 2016! YAY! Here’s one of my new years resolutions: become acquainted with this tool-

Instead of asking for a new doll or video game this year, I figured it was about time to step up my faceup game. I’d been thinking about investing in an airbrush for awhile, but I knew little to nothing about them (though I’m still by no means well-versed). Luckily, my husband managed to find a set on sale, and it was exactly the airbrush I wanted.

Iwata’s Neo series airbrush is apparently one of the best choices for those just starting out, but even for those with experience, it’s a reliable tool. I asked for the opinions of faceup artists in a couple groups and this was the most popular choice. From what I’ve done so far, it controls very easily. The thickness of lines is mitigated by pulling back the button after it’s pressed down, which is simple enough after some practice.

In addition to the advice I received, I also asked what brands/paints people use with their airbrushes, as I’d received Createx acrylic airbrush paint in my starter pack. Acrylic paint will work with airbrushes, but you need to clean it out ASAP as it will gunk up the innards of the airbrush. the recommendation that caught me, however, was gouache.

Let me start by saying this box is the size of my hand. It’s 6 basic tubes of color… And it was $40 at my local art shop. Professional gouache (pronounced gwashe apparently) is usually pretty expensive, but also well worth it. Unlike acrylic which adheres to the surface instantly, gouache will give the user time to erase and correct mistakes. If I had known about that before, I probably would’ve started using it sooner since acrylics and I have our disagreements more often than not. Gouache dries matte and is water soluble. I’ve been told this is what Andreja from Nicolle’s Dreams on Youtube uses. If you haven’t seen any of her videos, look her up! She’s amazing.

Here’s our first project/labrat of the year: 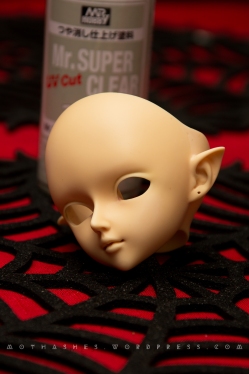 This is my practice head I bought a long time ago. I think she’s a CP Elf Shiwoo? Not 100% because I bought her off Ebay. When I got her she was covered in something I couldn’t identify at first… And it ended up being nail polish. Needless to say she’s got some stains, but for a practice head she’s perfect. I’ll post results of the experiment when I have them. Until then, happy new year everyone! May we all meet our dolly goals this year.

Edit: I was told by a kind member of DoA that she’s actually a CP/Luts Angel Elf Soo. Thank you Sm.!

2 thoughts on “Tidbits on Airbrushing Faceups.”

Here at #dollnorth2019 trying not to feel salty about my trip so far. Trip up to Toronto was rough with a hour and 45 minute delay to our flight in LGA (on the plane), along with everything before, inbetween and after (that I dont plan to mention). I had really hoped this would be an anxiety free vacation and, aside from spending time with my friend who came up for Anime North, it's been nothing but. Let's hope today is better? #dn2019 #bjd #balljointeddoll
"Sing me to sleep, Dirge." And he did. He sang her a song so melodious, so breathtaking, she hoped she might never wake again. . Btw, I still haven't painted his other hands. That's why one of them is conveniently out of frame... Because it's not actually there, lol. Just need to finish those and fit him with some good horns at this point. . . #bjd #balljointeddoll #abjd #bjdphoto #bjdphotography #bjdaddict #faceup #faceupdoll #faceupartist #bjdstagram #dollstagram #instadoll #artdoll #proartist #legitbjd #fifthmotif #venitu #demon #creepy #bjdboy
So I'm still not really back in the swing of things. The big reason for my inactivity right now is that my computer was having hardware issues and is in the process of being repaired. But, I really liked the company vs owner trend I've seen floating around and wanted to participate. I didnt do all my dolls since there are some that need updated pictures (and again, with no computer I cant really edit or upload then) but here's the bulk of them. Listed in order: 1. Soom Amber Pure Spirit 2. Soom Chrom Soul Tracker 3. Soom Heliot God Master 4. Doll Chateau Snowborn 5. IoS Chaos 6. Serenade Doll Suu . . . #bjd #balljointeddoll #balljointeddollphotography #abjd #doll #artdoll #ios #immortalityofsoul #ioschaos #bjdstagram #dollstagram #instadoll #legitbjd #proartist #vampire #bjdaddict #bjdboy #bjdowner #originalcharacter #bjdoc #dollsoom #bjdgirl #serenadedoll #dollchateau #snowborn
Lou... Where did you find vaseline and, more importantly, what do you intend to do with it? . On second thought, I'm not sure I want to know. . . . . #bjd #balljointeddoll #balljointeddollphotography #abjd #doll #artdoll #ios #immortalityofsoul #ioschaos #bjdstagram #dollstagram #instadoll #beetlejuice #legitbjd #proartist #vampire #bjdaddict #bjdboy #bjdowner #oc #originalcharacter #bjdoc #stripes
Both of us had a wonderful time with @bonelace and their handsome boi. Diana really enjoyed the attention whether she admits it or not. 😉 Nothing like dancing in front of a carousel to make one's heart race. . . . . #bjd #balljointeddoll #abjd #balljointeddollphotography #artdoll #artdolls #bjdstagram #dollstagram #instadoll #bjdstagram #bjdaddict #bjdowner #faceupdoll #legitbjd #proartist #doll #dolls #bjdoc #myoc #originalcharacter #fairyland #minifee #sircca #minifeesircca #unicorn #unicornsrule #unicornlove #msd
Just wanted you guys to know I'm still alive, haha. I went to Salt Lake a couple of weeks ago to see my amazing aunt and uncle and when I came back I didn't want to do anything at all. I have Seasonal Affective Disorder so that has played a big part I'm sure, but I think I've marginally got it under control. At least enough to work on this handsome guy. He's in the early stages but I think he'll be done by the end of the week. . . . . #bjd #balljointeddoll #abjd #bjdphoto #bjdphotography #bjdaddict #faceup #faceupdoll #faceupartist #bjdstagram #dollstagram #instadoll #artdoll #proartist #legitbjd #fifthmotif #venitu